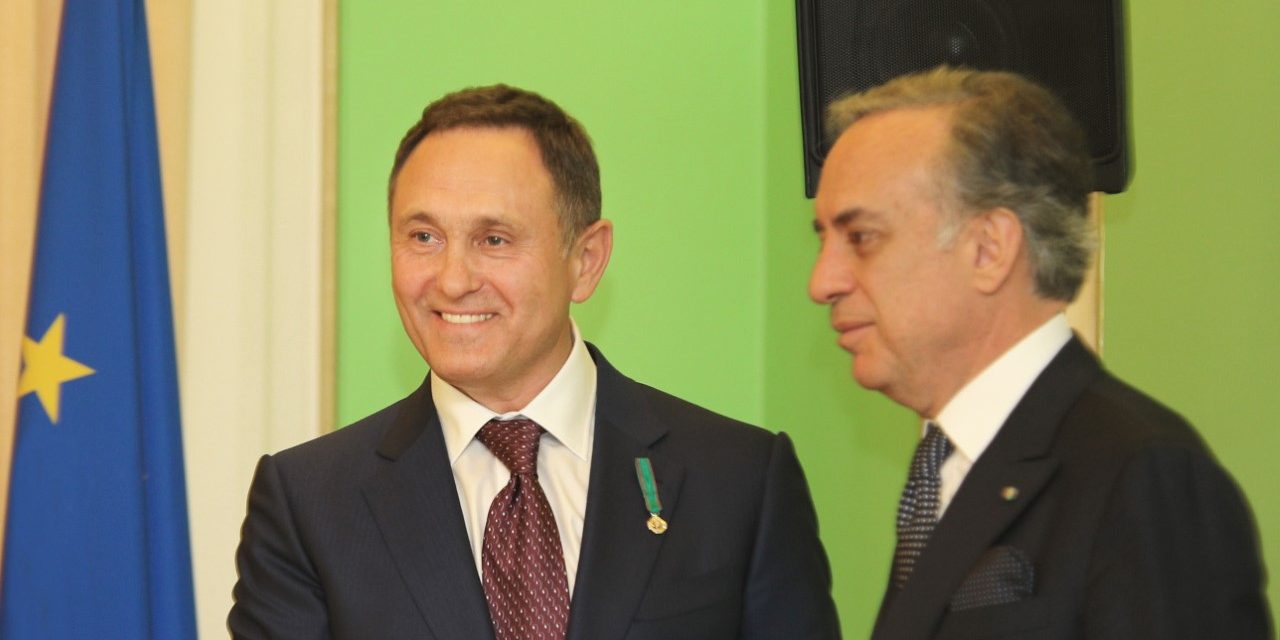 Valery Bondarenko is the first Russian mechanical engineer who was awarded the highest order of the Italian Republic for contribution to strengthening of economic relations between two countries. He established a number of joint ventures with Italian industrial companies – Cividale S.p.A., Cimolai S.p.A., Termomeccanica Pompe S.p.A., Orion S.p.A. on the premises of the Stankomash Industrial Park in Chelyabinsk.

As Valery Bondarenko noted, he is connected with his Italian partners not only by joint business, but also by long-term friendly relations: “Italy for a long time lives in my heart. Contacts of the KONAR Industrial Group with Italy got started more than 15 years ago. Over the years we entered into over 200 contracts, more than 50 companies work with us on a permanent basis. The flags of Russia, Italy and Chelyabinsk region are hoisted on the premises of our Industrial Park”.

Another plant is currently at the commissioning stage — Russian Electric Motors, which will produce electric motors for oil production and refining. The project participants are Transneft PJSC and KONAR JSC, and technologies and know-how were developed by the Italian company Nidec ASI S.p.A.

At the award ceremony, Valery Bondarenko thanked President of the Italian Republic for a high appreciation of his work, and Italian partners for their trust and business courage. “It does not matter where we were born, in the Southern Urals or in Northern Italy, in Moscow or Rome — we all have a special relationship to business, constant responsibility to partners, family, ourselves, and, of course, to our Homeland. I promise to use best efforts for a further development of bilateral relationship between Italy and Russia”, – he said.

President of Transneft PJSC Nikolay Tokarev became the guest of honor at the ceremony, thanks to which success of the international public and private partnership became possible. According to the request of Transneft PJSC, KONAR produces products within the framework of the Russian import substitution program. “Thank you for your trust in our common success, for special care for our projects and constant attention to the fact that our obligations to our Italian partners are performed perfectly”, — Valery Bondarenko addressed to him.

Aleksandr Goncharov, Business Rights Commissioner in Chelyabinsk Region, Advisor to President of the Chelyabinsk Regional Public Organization “Union of Industrialists and Entrepreneurs”, noted contribution of Valery Bondarenko to economic development: “You created a modern Industrial Park; you launched innovative high-technology facilities from scratch. Many of them are joint facilities established with partners from other countries, principally from Italy. Chelyabinsk region is very fortunate that it has entrepreneurs like you, such a powerful local investor who attracts the best technologies in the world. I think that our state will not leave your work behind”.

For information:
The Order of Merit for the Italian Republic was established in 1951 as a merit badge to the republic in the fields of art, economy, social and humanitarian activities. Earlier, the world-famous figures, including our compatriots — Pilot-Cosmonaut Valentina Tereshkova, Musicians Mstislav Rostropovich and Valery Gergiev, Head of the Hermitage Mikhail Piotrovskiy, were awarded. In April 2018, Director Andrey Konchalovskiy became a member of the Order. Among Russian businessmen, this award was received by Chairman of the Board of Gazprom PJSC Aleksey Miller and Chairman of the Board of NOVATEK PJSC Leonid Mikhelson.