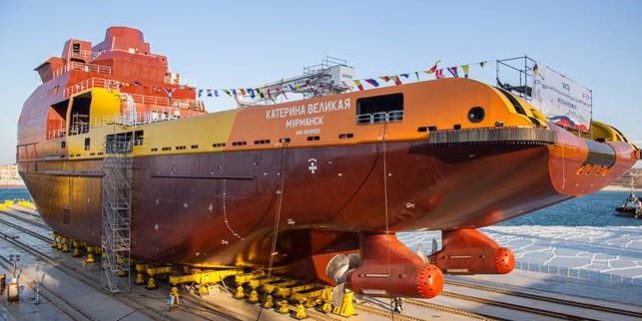 The main production divisions of KONAR group were involved into execution of this order: BVk foundry, machining complex and research and development center.

Zvezda shipyard (Primosrky kray, Bolshoy Kamen) launched the first multifunctional supply ship of heavy-duty ice class Icebreaker 7 named Catherine the Great. Later the ship will be towed to the outfitting quay where it will undergo a first stage of docking trial. This is the lead ship in the series of four ships for oil and gas company Rosneft, works on three other ships are carried out in parallel.

According to the information from Zvezda shipyard, the multifunctional supply ships of heavy-duty ice class have a high degree of equipping. Their length is 106 meters, width – 22 meters, deadweight – 510 tons. The ships are intended for the unlimited area of cruising including severe climatic conditions. They will be used for different purposes: transportation of cargo to the marine facilities, towing and tracking ice breaking operations, rescue, fire distinguishing.

High speed and maneuver characteristics of the ship are provided by propulsion units – the key element of its electric propulsion system. The supply ship is equipped with two propulsion units of high ice class with power capacity 7.5 MW and 6 meters height. Each of them weighs 130 tons. These propulsions units allow the ship to move through ice thicker than 1.5 meters.

The propulsion units project was performed by Sapphire Engineering and training center LLC (Saint Petersburg). The main production operations and assembling are carried out in Bolshoy Kamen city at Sapphire Plant for production of propulsion units LLC — joint venture of Rosneft and GE company.

According to the action plan of cooperation between four companies (Rosneft, KONAR JSC, Sapphire Engineering and training center LLC, Sapphire Plant for production of propulsion units LLC), KONAR JSC ensures compliance with the requirements of the Government of the Russian Federation No.719 regarding localization of production of propulsion unit components in the territory of the country. The action plan is approved by Vice President of Rosneft PJSC Andrey Shishkin and General Director of KONAR JSC Valery Bondarenko.

KONAR company provided complete localization of production of propulsion units propellers. Propellers are composed of a hub, hub fasteners, bossing and blades. Their production is arranged in Chelyabinsk in the territory of Stankomash Industrial park.

As of today, KONAR company has produced, commissioned and delivered to the client six sets of propellers for three multifunctional supply ships that are being built at Zvezda shipyard. Production of the seventh and the eights set of propellers for the fourth ship is being finished.